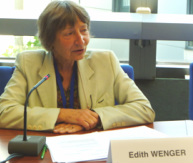 The directorate IV of the Council of Europe took the initiative to gather all the constituents of the organization around a major challenge, the climate change, the impacts of which will affect the survival of humanity. This subject of concern is discussed by numerous international organizations but was never envisaged under the angle of human rights or under that of democracy and social cohesion. Only the question of the ecological refugees appeared in the public debates. Now the future of the planet and its inhabitants, in terms of territories and resources, requires, more and more in the short term in considering the current trends, a democratic governance aiming at solidarity between the peoples.

The INGOs of our committee are called to make proposals so that the international conference scheduled for October 2012 is a real headway in the reduction and the adaptation to the effects of the climate change at well for the member countries of the Council of Europe and at global level.

We shall have the task to make concrete, realistic, adapted proposals, to guarantee the taking into consideration of human rights, democratic decisions, and social cohesion. The civil society, which we represent, has to bring up to the decision-making level the needs of the population. The large variety of interests of the committee' members has the power to make so that none of these needs is neglected.

The drafting and  follow-up of a recommendations to be done with  the various directorates of the Council (including the Court), the PACE and the Congress in an international conference during which  propositions will be made to include the environment into the European Convention on Human Rights and to build this right at  international level in cooperation with the UN system.

This WG will prepare the INGO's position paper up to the COP15 to be held in Peru before the Paris conference as announced by UN.  The work will be presented in January 2014 in connection with  the United Nations NGOs and directorate.