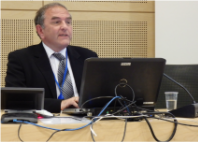 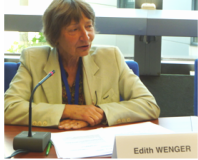 THEME
The initiative to bring together all the components of the Organization around the major challenge of the impact of climate change on human rights, came from the Directorate IV of the Council of Europe. This concern considered by many international organizations had never been considered i terms of human rights or in that of democracy and social cohesion. Only the issue of "environmental refugees" had appeared in public debates. Now the future of the planet and its inhabitants in terms of territory and resources requires, at increasingly short term given the current trends, democratic governance for solidarity between peoples.

OBJECTIVES
The Working Group led by Edith WENGER and later on Karl Donert decided to take the leadership on this concern less pregnant within the Council of Europe, by proposing regular debates and commitments to the Committee and the Conference of INGOs, linked to special events organized around the world.

The INGOs are called by our committee to make proposals for the international conference to reach real progress in reducing and adapting to climate change impacts for both the member countries of the Council of Europe and globally. We will have the task of making concrete proposals, realistic, adapted to ensure the inclusion of human rights, democratic decisions, social cohesion. Civil society, which we represent, must be traced in decision-making needs of the population. The wide variety of interests of NGOs members of our committee has the power to ensure that none of these requirements is overlooked.

Our Working Group intends to engage in the monitoring of recommendations that will be made to translate in normative law.
The Council of Europe has the tools to this development

Organization of a round table at the Council of Europe with PACE, CLRAE and the Court of Human Rights
Publication of annexes to the position paper adopted by the Committee
Organization of side events during the COP21 (Paris Summit)
Monitoring the Post-Paris committment
Publishing a newsletter

see below program of the event on 9 December